On Saturday we had the Captain's Quaich Scratch and Net Competition,

Coming out on top with a gross 70 was Jon Bodicoat, beating Andrew Ashley on 71 and Andrew Mackenzie on 72.

In the Net section, Martyn Fogiel was victorious on net 62, beating Graeme Ferguson on 65 and Liam Brown on 67.

Congratulations to JON and MARTYN.

Tomorrow sees the penultimate round of our 10 event Nippon Gases Europe Order of Merit and following last Saturday's competition, the Gross event sees Andrew Ashley move onto 53pts, with Chris Polson remaining on 41pts and Martyn Garvie on 40pts.

In the nett section, with 20pts still to play for this one remains wide open although Martyn Garvie has the initiative on 20pts, Andrew Finlay on 16pts, Graeme Ferguson and Austin Hay on 15pts, Lee Mathieson on 13pts, George Breen and David Adam on 12pts, Andrew Ashley and Stephen Watson on 11pts, with another 8 players on 10pts and a further 13 players on 8 and 9pts. 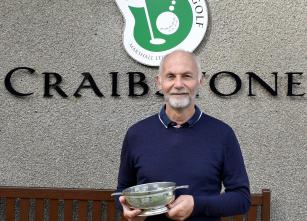