Congratulations to Tommy Ogston who scored 74 points in the weekends Peter Simpson Stableford competition. Two rounds of 37 points was enough to take top spot over,

Congratulations also to our member John Borthwick who not only won the Club Championship at Trump International Links on Sunday but also recorded his first ever hole in one during the final.

At 9.30am Scott Anderson takes on Paul Reid in the Handicap Cup Final.

Spectators are welcome to follow these finals around the course on Sunday morning. The Foursomes final between Ian Still / Stuart Milne and Murray Bruce / George Breen will be rearranged due to Ian being in the Scratch final also. Details to be advised. 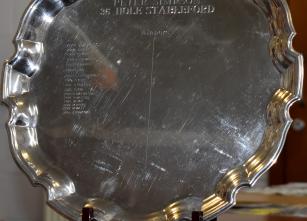