Congratulations to Graeme Carle and Andy Carle who defeated Colin Donald and Eric Miller 4 and 2 in the final of the Foursomes Competition this afternoon. It was a close game early on with Colin and Eric using their strokes to stay competitive but on the back 9 Graeme and Andy were solid to edge ahead and win the match.

Well done to GRAEME and ANDY and hard luck to Colin and Eric. Also a big thank you to all the pairs who competed this year, we nearly managed to get all the games played as per the tight schedule.

There is still another opportunity for a pair to get their hands on a trophy this year, on Saturday 3rd October it is the Gents Greensomes Trophy - just book your tee times as normal and then decide who are playing with. Greensomes are where both players drive and then you play alternate shots to complete the hole. There is no other competition on that day, so make sure you are paired up to play in this event.

The final round is this Saturday where we have the Gents Saturday Ryder Cup Medal (only named as this was the original date for the Ryder Cup before covid postponement).

The Gross event has been won by ANDREW ASHLEY who has an unassailable 15pt lead. Andrew topped the charts on 56pts with Chris Polson on 41pts and Martyn Garvie on 40pts. Congratulations to Andrew who has won the Craibstone Triple Crown again, adding the Order of Merit to the Club Championship and the Scratch Matchplay.

The Nippon Gases Europe Net event is extremely tight with 6 players within 5pts, Martyn Garvie leads the way still on 20pts, but Lee Mathieson and last years winner Paul Reid are sitting on 18pts, Andrew Finlay is on 16pts, with Graeme Ferguson and Austin Hay on 15pts, another 13 players can still win or at least tie the 20pts, so we are in for an exciting round on Saturday to see who can shoot the lowest net scores and pick up this season long event. Good luck to you all. 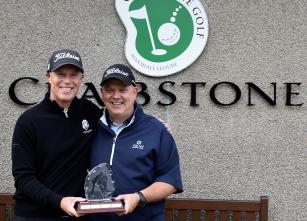