Hard ground and frosty conditions this weekend sees not much movement in the Race to Craigendarroch competition.

George Breen remains in front on 34 points with Andrew Finlay 5pts behind on 29pts, Doug Cox moves up to equal 3rd with Scott Anderson on 24points.

In the Eclectic Division 1, Andrew Finlay has went to 17 under on 52, Ian Still remains on 53 in 2nd place with Martin Elrick in 3rd on 54, with George Breen and Jon Bodicoat a stroke behind on 55.

In Division 2 it remains a three way tie on 60 with Calum Kinnaird, Derek Cruickshank and David Adam, moving closer on 61 is Scott Anderson and Jamie Eastcroft, with Mark Mundie and Ian Milne on 62.

Division 3 sees Chris Dunning join Graham Wright and Stevie Tawse on 68 with Mitchell Smith on 69 and Ian Reid on 70.

63 players out of 108 have picked up order of merit points, who is going to find form in the next 2 or 3 weeks and rack up some points and climb the table. 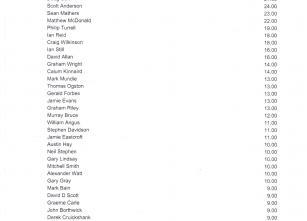