This years winter league is being played at such a high standard and Saturday past was no exception with a number of players reaching 40pts or more, the birdies and eagles were flying in across the course.

The Race to Craigendarroch Order of Merit has tightened up with Sean Mathers moving into second after his 43pt round and Graham Wright has shot up to equal 5th place after his 44pt score.

George Breen still leads on 34 order of merit points with Sean Mathers on 32pts, Scott Anderson up to 30pts, Andrew Finlay on 29pts and then a gap to Doug Cox and Graham Wright on 24pts.

In the eclectic competition, Division 1 has the same leaders of Andrew Finlay on 52, Ian Still on 53 and Martin Elrick on 54, but the closing pack are bunching up on 55 - George Breen, John Borthwick, Craig Wilkinson, Jon Bodicoat and David Peters.

A great weekend helped with an eagle 2 on 14, sees David Adam go 3 clear on 57, with Scott Anderson, Calum Kinnaird and Derek Cruickshank on 60, with Ian Milne and Jamie Eastcroft on 61, with a bunch on 62 - Mark Mundie, Sean Mathers, Mark McCann, Jim Cramond and Matthew McDonald.

The Division 3 comp has Graham Wright leading on 67, with Stevie Tawse and Chris Dunning on 68, Mitchell Smith on 69, Ian Reid on 70 and on 71 its Jack Alexander, Philip Turrell, Seamus Ryan, David Alexander and Doug Cox.

The other eagle picked up on Saturday was Andy Carle on the 1st hole. This is what helps your eclectic score, and we have plenty more rounds to be played to add to the eagle count. 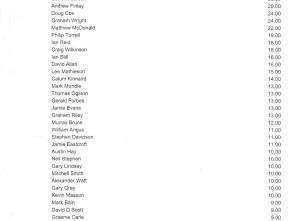