Scoring 38 stableford points on saturday, Sean Mathers has opened up a gap in the Order of Merit with his points now sitting on 46, George Breen remains on 34 with Matthew McDonald picking up 8pts after his level par back 9 on saturday sees him tie with Scott Anderson on 3rd place on 30, next is Andrew Finlay on 29 and then David Allan who has quietly picked up points in the last couple of weeks moving onto 26.

Time is running out for others to burst through the pack and give them themselves a chance. The scoring on saturday was once again high considering the strong wind, and well done to Ian Milne for scoring 40 stableford points and to Garry Edgar who breezed his way round in 43 Stableford points. The lads who scored 37 must have felt that they were near the top but no, not in the Craibstone Winter League this season!!!

The eclectic has seen things tighten up, In Division 1 - Andrew Finlay still leads the way on 50, but David Peters has joined Ian Still on 53, with George Breen, Martin Elrick and Craig Wilkinson on 54 with JB1 and JB2 remaining on 55.

Division 2, David Adam picked up another birdie to move onto 56, but Derek Cruickshank and Ian Milne also picked up to move into equal second on 58, and then there is bunch sitting on 60 - Scott Anderson, Calum Kinnaird, Mark Mundie, Sean Mathers and Jamie Eastcroft.

In Division 3, Stevie Tawse, helped with an eagle on the 14th goes to 64, with Graham Wright in hot pursuit on 66, Chris Dunning is on 68 and Ian Reid and Mitchell Smith are on 69.

5 weeks to go - so that's 50 order of merit points to pick up and 5 weeks of birdie and eagle chances, none of the leaders can rest easy yet, but the pressure is on those chasing to score the points required. 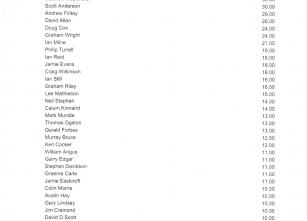