Wind and more wind and then rain, but still some decent scoring on Saturday for the latest round of the Race to Craigendarroch Order of Merit.

With 4 rounds to go, Sean Mathers lead has narrowed, he remains on 46pts, Scott Anderson has moved into second on 40pts after a great round of 40 Stableford points, with George Breen joined on 34pts by Andrew Finlay, Matthew McDonald is on 30pts and David Allan on 28pts.

John Borthwick picked up a good 9pts to double his score to 18pts - is this the start of another late charge from John like he done in the season long Nippon Gases Order of Merit?

49 players can still mathematically win the Race to Craigendarroch for 2020.

Its tight for the eclectic competitions, in Division 1, Andrew Finlay is on 50 and keeps his 3 shot lead, George Breen has joined Ian Still and David Peters on 53, with Craig Wilkinson and Martin Elrick on 54, with John Borthwick and Jon Bodicoat remaining on 55.

In Division 2, there was improvements from a few of the contenders, with David Adam moving onto 55 and a two shot cushion over Derek Cruickshank on 57, in 3rd place on 58 are Ian Milne and Matthew McDonald, then on 59 its Scott Anderson and Mark Mundie, with Calum Kinnaird, Sean Mathers and Jamie Eastcroft all left on 60.

Division 3 still has Stevie Tawse leading the way on 64, with Graham Wright in 2nd on 66 and then its 68 for Jack Alexander and Chris Dunning, and on 69 its Ian Reid and Mitchell Smith.

The pressure is on to try and find that missing birdies or even pick up an eagle, it does mean that the eclectics will go down to the last round to see who picks up the winter league vouchers. The leaders in each section although they have a gap to 2nd place know that things can change quickly, it only takes someone to hole a second shot and its game on, we've had a few this winter already.

Some holes are proving elusive, hole 10 (stroke index 17) out of the 23 names listed in contention for the eclectic - 10 of them have still to birdie this hole - an incredible statistic, considering how many rounds have been played. 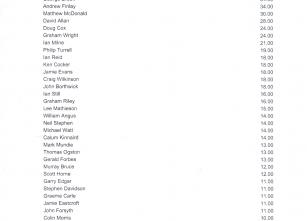