Following last Saturday's abandoned round after snow stopped play, it was back to action on a wet course, although the greens were fine with anyone atacking the pins gaining most ground.

There are two rounds left and the Order of Merit leaderboard has tightened up, Sean Mathers continues to lead by 6pts, with only 6 players left with a mathematical chance of topping the chart.

Sean Mathers is on 46pts, George Breen has joined Scott Anderson on 40pts, Andrew Finlay has crept up to 36pts, with Matthew McDonald also gaining some points to move onto 33pts with David Allan remaining on 28pts.

The eclectic sees a number of players still in contention, in Division 1, Andrew Finlay is on 50, Ian Still has moved onto 52, Craig Wilkinson joins George Breen and David Peters on 53, with Martin Elrick on 54, and John Borthwick and Jon Bodicoat remaining on 55.

In Division 2, David Adam's lead has been cut to 1, with his score of 55, being chased down by Derek Cruickshank on 56, back in 3rd on 58 its Scott Anderson, Ian Milne and Matthew McDonald with Mark Mundie on 59

The eclectic takes both Saturday and Sunday rounds and although last Saturday was wiped out a number played on the Sunday with some managing to pick up a shot.

Hopefully the weather stays kind and we can get the remaining two weeks played as its tight across the board and it will be interesting to see if any of the chasing players can pick up the points they need. Good luck to all - the standard this winter has been very high, hopefully you can all carry that onto the summer season. 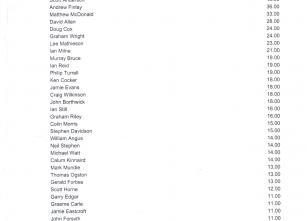